Carol Bradbury – Welcome To My World 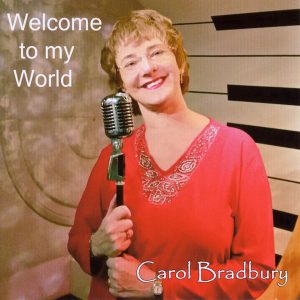 This one popped through the letterbox just in time for these reviews. It’s CD number nine from popular keyboardist Carol Bradbury. This is her first release at the Yamaha Tyros 5 after her three previous outings at the PSR-S910 and the three before that at the PSR-8000. This is also one for all you sequence dancers out there too, apart from the last track which isn’t.

Carol first CD was “The Feminine Touch” way back in 1996 which was played on the Technics KN2000. The first four of her CDs were on the Maestro label before she went ‘solo’ with her fifth, “Unforgettable Feelings” in 2007. So, looking at the dates, this CD is her twentieth anniversary release which is a milestone which I don’t think she was aware of, unless she just didn’t want to make a song and dance about it.

Highlights include, “Poetry in Motion,” an old-time Wurlitzer sounding “Music, Music, Music / You Are My Sunshine” and “Dad’s Army,” “Wonderful Tonight,” “I Have a Dream” and “The Rose”. There are also a couple of very pretty vocals with the non-sequence one at the end, “When You Tell Me That You Love Me” and a more unusual one with “In the Old Bazaar in Cairo”. As these are vocals and she’s even holding a microphone on the cover, it seems she has made a song and a dance about it after all.

I think this CD is her best to date, the playing is better and the keyboard is certainly an improvement on the PSR-S910 and 8000. The CD also is dedicated to her inspiration, the late Brian Sharp.

FULL TRACKS: [Foxtrot/Blues] Welcome To My World • [Foxtrot/Blues] I’d Like to Teach the World to Sing • [Cha Cha] Poetry in Motion • [Cha Cha] Lipstick On Your Collar • [Quickstep] Music, Music, Music / You Are My Sunshine • [Quickstep] Theme from Dad’s Army • [Rhumba] Wonderful Tonight • [Rhumba] I Have a Dream • [Jive] All My Loving • [Tango] Never Do a Tango with an Eskimo / I Can’t Tell a Waltz from a Tango • [Mambo] Blame it on the Bossa Nova • [Mambo] In the Old Bazaar in Cairo (Vocal) • [Waltz] The Rose • [Non-Sequence] When You Tell Me That You Love Me (Vocal).