Our Love is Here to Stay / They Can’t Take That Away from Me
Embraceable You
These Foolish Things
Dream a Little Dream of Me
Side Saddle
All the Things You Are / The Very Thought of You / Love is the Sweetest Thing
The Maiden’s Prayer
The Black and White Rag
Body and Soul
Spread a Little Happiness
The Anniversary Waltz / Always
Jazz Legato
Le Lac de Come (Lake Como)
The Homecoming
Marigold
What’ll I Do?
Forgotten Dreams
Casa Loma Stomp
Tango
With a Song in My Heart / Blue Moon / Bewitched
I Wish You Love / I’ll Be Seeing You 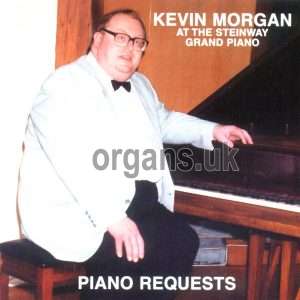 Kevin Morgan was born in Dorset and began to play the piano when he was only three. Head Chorister of Sherborne Abbey and a Music Scholar at his school, he was awarded several national prizes for the highest marks in the Associated Board of the Royal Schools of Music examinations, particularly for Grades 6,7 & 8.

He started playing the organ when he was nine and played for his first service in Salisbury Cathedral only two years later. After extensive studies at Durham, London, Oxford and Cambridge, he moved to Bolton in September 1986 to become Organist and Choirmaster at the Parish Church, a post he held for some nine years. Whilst there, he was introduced to the theatre organ by Ron Curtis, took to the instrument straight away, and with his fresh approach to it has now become one of our top players, deservedly in ever increasing demand for concerts all over the country, and occasionally on the continent, on piano, classical organ and electronic organ, in addition to the theatre pipe organ, at which he is regularly featured on “The Organist Entertains”.

Kevin taught piano and organ at Bolton School for twelve years, during which time he continued to study on a part-time basis at the University of California, culminating in the award of a PhD in music. He is now Organist and Head of Keyboard Studies at the renowned Stonyhurst College in Lancashire.

In 1997 Audicord was proud to release “Introducing Kevin Morgan,” his aptly titled first solo album, on which he played a Compton theatre organ. Being an equally fine and versatile pianist, Kevin often includes a piano interlude in his organ concerts at venues that have a suitable instrument. They have always been very well received, so much so that lots of people asked him to make a piano album, and Audicord was more than happy to oblige, and released ‘The Toast of the Town” in 1998, recorded on a Steinway grand piano in the noted acoustics of a large church in Blackpool.

Since then, Kevin has successfully recorded two more of the finest theatre organs in the country. However, not only have sales of that piano album exceeded all expectations, but requests for another have literally never stopped, and with many came suggestions for titles to be included, and as the Steinway was once again made available to us, what else could we call this new album but “Piano Requests”? With another programme full of musical contrasts, we sincerely hope it will provide you with at least as much pleasure as the first.