This is Nick Martin’s first DVD release since “Shrewsbury Revisited” in 2014 and was made available to his fan club members earlier in the year. It’s a compilation spanning 2006-2015 and has been taken from several of his self-produced DVDs, plus one from the OS Digital/Valentine label, “At Home With…”.

If you have all of Nick’s commercial DVDs, there is still something for you as there is material from a DVD, “Wersi Cavalcade” released to his fan club members in 2009. That featured tracks on the Louvre he had for a couple of years, other video of which previously made an appearance on “At Home With…”.

There is also a medley recorded at the Shrewsbury Buttermarket Wurlitzer on April 19th 2015 which makes its inaugural appearance here. This is not to be confused with his two commercial Buttermarket DVDs released in 2009 and 2014.

Onto the DVD and each section starts with a still of the DVD and the year of release. There is a good mix of venues including the Blackpool Opera House, the Shrewsbury Buttermarket, The Wolverhampton Civic Hall Compton, The Kirk of Dunedin in Florida (The ‘Away’ part of the title). For the electronic fans we have the Wersi Louvre, Hammond A-100 and Technics FA-1. For the ‘confused’ people who can’t decide, we have some tracks on the four-manual George Wright ‘Signature’ Allen Digital Theatre Organ.

Nick has only plucked one or two medleys from each of the DVDs, apart from “At Home With…” where he’s taken three sections, although only one from each of the three organs used on that DVD; the Wersi Louvre, Technics FA-1 and Hammond A-100.

Compilation CDs and DVDs are always difficult to stock and review. They are great for introducing people to an artist, but not so good for someone who has most of the material already. Still, this is a nice one for the collection and shows what Nick can do ‘across the (pedal)board’ on various organs, which is pretty impressive. 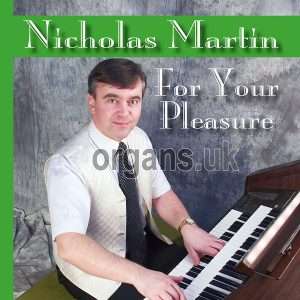 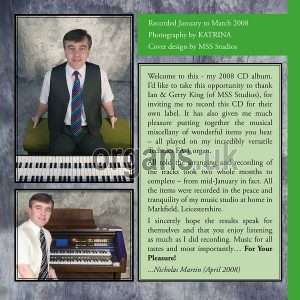