Penny was born in Buckinghamshire to a musical family. When she was two they inherited grandmother’s Bluthner. It was infested with mice, which awoke Penny’s interest in the instrument, and she started piano lessons at four. Tuition on violin, cello, classical guitar, trumpet and church organ followed.

Another inheritance, of £500 from her grandfather with the instruction “use it unwisely”, led her to buy an electronic instrument when she was fifteen. Although it was a rather ropey machine, it led to greater things later on in life when the keyboard orchestra was invented.

When she was sixteen she won an Arts Festival Bursary to study piano with The Royal Academy’s Christopher Elton, whilst continuing her classical organ studies with Julian Larkin. At eighteen she went to the Royal College of Music to study piano, organ and composition.

Like so many before her, Penny overdid the practise and found herself with both arms in plaster and her musical studies apparently at an end. She left the College and trained as a secretary, before working in the recording industry and the police force. She eventually trained as a legal executive. Not until some years later did she resolve her joint problems with the help of The Alexander Technique. At an age which most people regarded as “too late”, she resumed her studies and obtained her qualifications, including Associateship of the Royal College of Organists and Fellowship of the London College of Music.

Despite the late start, Penny has enjoyed an exciting musical career, spanning 3 continents. Her pipe organ performances have taken her across Europe (including the fine instruments maintained by the Netherland Organ Federation), and in the UK highlights have been Bristol’s Colston Hall, the Croydon Fairfield Halls, Birmingham Town Hall and a plethora of lovely churches. She has also given theatre organ concerts on some wonderful organs, not least the Wurlitzer in the Tower Ballroom at Blackpool.

Penny’s passion for the keyboard orchestra has satisfied her ambition to play every instrument in the orchestra and to be a conductor. She has thrilled audiences countrywide, including Bournemouth Pavilion Theatre, Birmingham Town Hall, Wolverhampton Civic Hall, The Arnold Theatre Nottingham, The Regis Theatre, and countless music festivals and clubs.

Penny is now the proud owner of a Yamaha Stagea ELS-01C Keyboard Orchestra. One of maybe 3 such instruments in the UK, it offers an impressive array of performance and sound-creating opportunities.

Her Other Musical Activities

Penny has broadcast widely, including an interview with Margaret Howard for Classic FM, many appearances on The Organist Entertains, and three appearances on Pick of the Week. For some years she presented the monthly “PennyWise” organ slot on BBC South and West’s “Organ Stop” programme. She also writes for the specialist music press. Her most distant assignment was in South America, reporting on the first Augustin Barrios Guitar Competition.

Penny has worked as an examiner for the London College of Music, has lectured and adjudicated at most of the major keyboard festivals and led holidays for Adult Education bodies such as Missenden Abbey, HF Holidays and the RNIB. Her experience with visually impaired learners led to the production of her CD tuition course, A Keyboard at Your Fingertips.

In 2000, Penny married Tony Kerr, a graphic designer, and they share a love of music, motorhomes and cycling. Penny is also an avid gardener and cook. Between them, they have six organs, a grand piano and twelve keyboards – and not much space! 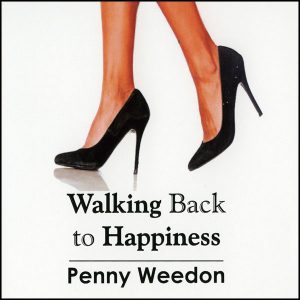 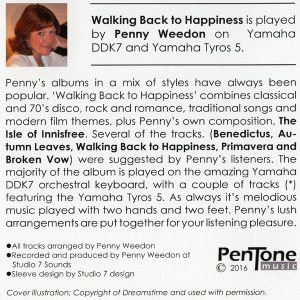